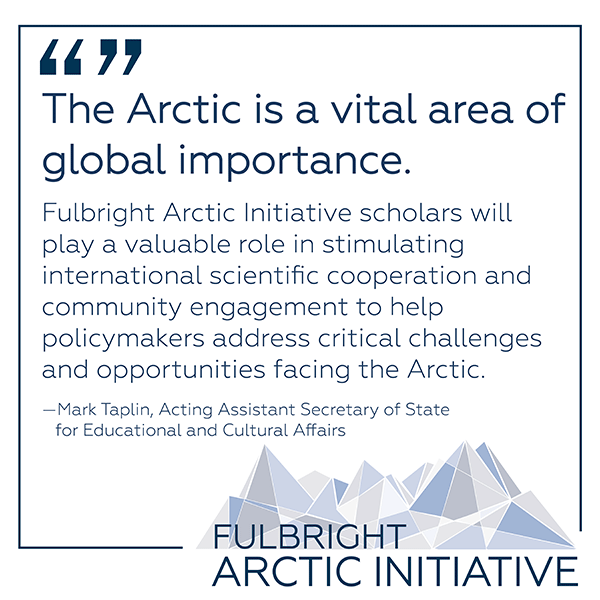 The U.S. Department of State’s Bureau of Educational and Cultural Affairs has announced the launch of the second Fulbright Arctic Initiative.

The Fulbright Arctic Initiative is designed to create a network to stimulate international research collaboration on Arctic issues while increasing mutual understanding between people of the United States and the people of other countries.  Using a collaborative multidisciplinary model to emphasize communication across disciplines and knowledge co-production, the Initiative will translate theory into practice to address public-policy research questions relevant to Arctic Council member states’ shared challenges and opportunities.

“The Department of State is committed to ensuring the success of the second Fulbright Arctic Initiative, including through our cooperation with partner governments and Fulbright Commissions in fellow Arctic member states,” said Acting Assistant Secretary of State for Educational and Cultural Affairs Mark Taplin. “The Arctic is a vital area of global importance. Fulbright Arctic Initiative scholars will play a valuable role in stimulating international scientific cooperation and community engagement to help policymakers address critical challenges and opportunities facing the Arctic.”

Faculty and researchers from the eight Arctic Council member states—the United States, Canada, Denmark, Finland, Iceland, Norway, Russia, and Sweden—can now apply for this 18-month collaborative research program, which will begin in spring 2018 and run through the fall of 2019. The application deadline for international applicants is October 16, 2017, and the deadline for U.S. applicants is October 30, 2017. Scholars can apply online through the Fulbright Arctic Initiative website.

Established researchers, early-career specialists, and indigenous knowledge experts from the Arctic Council member states will join together to form a network of scholars to conduct research in one of two focus areas:  Resilient Communities and Sustainable Economies.

Approximately 12 outstanding scholars will be selected through an open, merit-based competition to participate in an individual Fulbright exchange and convene with the other scholars for three in-person group seminars and on-going virtual communication to carry out team-based research.

This program builds on the strong existing networks developed by the 17 scholars who took part in the first Fulbright Arctic Initiative over the 18-month period in 2015-2016 that coincided with the United States' chairmanship of the Arctic Council.

Dr. Michael Sfraga, director of the Polar Initiative at the Woodrow Wilson Center, affiliate professor, International Arctic Research Center and former vice chancellor, University of Alaska Fairbanks, and Dr. Ross A. Virginia, director of the Institute of Arctic Studies and the Myers Family Professor of Environmental Science at Dartmouth College, will once again serve as the distinguished co-lead scholars for the Fulbright Arctic Initiative. They will provide intellectual leadership throughout the program, in addition to mentoring program participants and facilitating discussion and collaboration.

The Fulbright Program is the flagship international educational exchange program sponsored by the U.S. government and is designed to build relations between the people of the United States and the people of other countries that are needed to solve global challenges. The Fulbright Program is funded through an annual appropriation made by the U.S. Congress to the U.S. Department of State. Participating governments and host institutions, corporations, and foundations around the world also provide direct and indirect support to the Program, which operates in over 160 countries worldwide.

The Fulbright Arctic Initiative is administered by the Institute of International Education on behalf of the U.S. Department of State and in collaboration with Fulbright Commissions and offices in the participating countries.